http://www.bailii.org/ew/cases/EWHC/Fam/2013/4815.html
This is a decision of the High Court, relating to two married applicants who were married and living together when

BUT by the time the Court was considering whether to make the adoption application, they had separated.

This is quite an unusual situation – this is the third such reported case where this has happened and in each of them the Court has gone on to make an adoption order to both applicants determining that this is in the child’s interests.

“I am not to be thought to have lent judicial support to the making of adoption orders in favour of separated couples as a general rule.”
[But, just as we saw with Re D earlier in the week, once the Court unstoppers the bottle for one case, that genie can be summoned up in others. The only way for a Judge NOT to make a precedent when doing something brand new, is to not report the case]
In this case, the statutory fly in the ointment was said to be section 42(7) of the Adoption and Children Act 2002.
(7)An adoption order may not be made unless the court is satisfied that sufficient opportunities to see the child with the applicant or, in the case of an application by a couple, both of them together in the home environment have been given— .
(a)where the child was placed for adoption with the applicant or applicants by an adoption agency, to that agency, .
(b)in any other case, to the local authority within whose area the home is.
The Court recognised that the wording of the Act there is somewhat vague as to whether what is intended is that the Local Authority are able to see the child in the home AFTER the application is lodged in the preparation of their report, or whether they just need to have been able to see the child in the home of the adopters AFTER placement.

There was some debate during the course of the hearing as to when the opportunities to see the child must have occurred. Must they have occurred after the adoption application has been made or can they have occurred before? There is no specific timeframe referred to in sub-section 7; it simply requires the court to be satisfied that there have been the requisite opportunities. I do not propose to deal with this issue because it is clear that, in this case, there have been ample opportunities for the local authority to see M with the applicants “together in the home environment” both before and after the application. Miss R has visited the home on many occasions. I am, accordingly, satisfied that the provisions of s. 42(7) are fulfilled.
And the Court being satisfied that there is no fly in the ointment, went on to consider the welfare checklist and give reasons why a joint adoption order is the right thing for the child.

[Incidentally, those reasons seem to give broad encouragement to anyone else in this position and would seem to support the making of a joint adoption order to anyone in a similar position in the future unless the separation was particularly acrimonious]

But were the Court looking for that fly in the right jar of ointment?

I suggest (and am grateful to Natasha Watson on this for doing all of the real brainpower and legwork) that the real legal difficulty here is in s50.

Section 50 is dealing with the circumstances in which an adoption order can be made – and then relies on a definition in s144(4).

[It was the most controversial and most debated clause of the Act – bearing in mind that this was back in 2000/2001, because it was the part of the Act that opened up the possibility of adoption by gay couples. I once had the misfortune to have to read all of the Parliamentary debates on the Adoption and Children Act and nearly 75% of the discussions were about this particular clause, so rest assured that this section had more scrutiny than any clause in modern Parliamentary history – it indisputably says what Parliament finally agreed it should say]

The Act then defines “couple” for those purposes in s144(4)
(4)In this Act, a couple means— .
(a)a married couple, or .
(b)two people (whether of different sexes or the same sex) living as partners in an enduring family relationship.
At the time that the adoption order was being made, the two adopters here were married to one another, but were not living together. So they are married – but are they a “married couple” ?

In a common sense definition, could one really describe them as a “married couple” or even “a couple” ? If they aren’t, then they can’t have a joint adoption order.

Can you be a ‘married couple’ or described as ‘a couple’ once you’ve split up? Or are you a married couple until you get the decree absolute?
Do you want a concrete illustration? You may recall the news earlier this year that Chris Martin and Gwyneth Paltrow had ‘consciously uncoupled’ and gone their separate ways. They are still married.

Are Chris Martin and Gwyneth Paltrow a married couple?

If they aren’t, neither are these two adopters. And on that basis, the Court is not able legally to make an adoption order to both of them.

Another issue that arises in relation to this is that if we are going to describe two married people who no longer live together or wish to as “a married couple” than we no longer have equality.

Look at the second limb of s144(4)
b)two people (whether of different sexes or the same sex) living as partners in an enduring family relationship.
If we are going to say that two people who are married continue to be a ‘married couple’ until they divorce, then we are no longer treating married people and people in an enduring family relationship the same.

Because married people can split up and still get the adoption order, but cohabiting people can’t.

If two people in an enduring family relationship make the adoption application and then break up before the order is made, then they would not satisfy s50.

You can’t be in an ‘enduring’ relationship once there’s a separation. By definition, it hasn’t endured.

Thus, the Court is discriminating (IF we are saying that Chris and Gwyneth are still a married couple) in favour of married people in a way that they wouldn’t do in relation to two people who were cohabiting.

[See THIS article in the Daily Mail
http://www.dailymail.co.uk/news/article-2800896/marriage-no-better-cohabiting-legal-rights-abolished-adulterous-judge.html

for judicial differences of opinion as to whether married people and cohabiting people ought to have the same rights. I take no responsibility for your sense of moral well-being or compassion after reading a piece in the Daily Mail. I can save you the trouble and say that the Mail is more on the side of Coleridge (marriage is best) as opposed to Mostyn (we should stop favouring marriage over cohabitation in law) and decide that the best way to sift this debate is to indulge in personal attacks.  If Coleridge J is the sort of person to keep a scrapbook, he might have been reaching for the bottle of Gloy Gum for this one ]
I suppose that the next Court to tackle this issue can say that for the purposes of s50 and s144(4) two people who are married remain “a married couple” until such time as they divorce.

After all, just this month we have seen Judges decide that article 8 of the Human Rights Act doesn’t apply to the Court deciding private law proceedings (re Y http://www.familylawweek.co.uk/site.aspx?i=ed134192 – even when the Court of Appeal expressly said otherwise in Re A ) and that if a clause in statute says “must” that can be simply ignored – (Re X.
http://www.bailii.org/ew/cases/EWHC/Fam/2014/3135.html )

Now, I can put an image in here – the two obvious competing ones are a nice photo of Chris Martin’s new paramour, or a bottle of Gloy Gum. 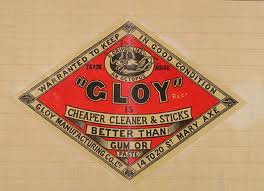 *Re the title, the piece is obviously crying out for a lyric or song title from Coldplay, but I’m afraid that I subscribe to the Alan McGee school of thought that they are ‘indie bedwetters” and thus I don’t have a glib reference.