An Emperor and an Empress

I did declare, when I started this blog, that the subjects would be “law, nonsense and the nonsense of the law”,   and I’ve got stuck into the first and third, but have entirely neglected the second.

Luckily, my head is full of nonsense, which I am more than happy to share.

So, this is a little essay of nonsense, about an Emperor who wasn’t, and an Empress who was (but who didn’t do it well).

Honestly, no law in this at all, so don’t feel cheated to get to the end and find no legal information, nor any skilfully drawn parable pertaining to law. I tell these stories because I like them, and for no other reason.

Emperor Norton I of America

Joshua Norton was an inhabitant of San Francisco. He had been a successful businessman, having by the end of 1843 amassed a fortune of nearly a quarter of a million dollars.   (and that’s an incredible amount of money for those days).   He sadly lost it all in an attempt to corner the rice market, buying up every bit of rice that came in, with a view to then being able to sell it later at a profit, but two completely unexpected loads came in, and went on sale at a regular price, leaving him with far too much rice to be able to sell.

(As the late Mitch Hedberg once said “I love rice – any time you’ve got to eat a thousand of something, I’d go for rice”)

In 1859, Joshua Norton decided that he was in fact, the Emperor of the United States of America, and made this proclamation

At the peremptory request and desire of a large majority of the citizens of these United States, I, Joshua Norton, formerly of Algoa Bay, Cape of Good Hope, and now for the last 9 years and 10 months past of S. F., Cal., declare and proclaim myself Emperor of these U. S.; and in virtue of the authority thereby in me vested, do hereby order and direct the representatives of the different States of the Union to assemble in Musical Hall, of this city, on the 1st day of Feb. next, then and there to make such alterations in the existing laws of the Union as may ameliorate the evils under which the country is laboring, and thereby cause confidence to exist, both at home and abroad, in our stability and integrity

NORTON I,
Emperor of the United States.

He later became the Protector of Mexico too.

What I most like about the Emperor of America story is that rather than being ignored, or sectioned, or mocked, the people of San Francisco embraced Norton’s belief and allowed him to continue as though he were indeed the Emperor.

He wanted for very little, was much beloved and had the freedom of every restaurant in the city. The inhabitants provided him with regal garments, including a fetching beaver-skin hat, and he lived at the Eureka Lodging House, in not terribly palatial surroundings.

He gave proclamations, collected taxes, attended sessions of government, and when in need of money obtained it by selling his own currency.

He only once found himself challenged about his authority, when a newly appointed and over-zealous deputy arrested him and took him before the Commissioner of Lunacy.   (commissioner as in ‘in charge of it’ rather than the modern local government meaning of ‘in charge of going out and procuring it’  – that would be a whole different story)

The Evening Bulletin wrote: “In what can only be described as the most dastardly of errors, Joshua A. Norton was arrested today. He is being held on the ludicrous charge of ‘Lunacy.’ Known and loved by all true San Franciscan’s as Emperor Norton, this kindly Monarch of Montgomery Street is less a lunatic than those who have engineered these trumped up charges. As they will learn, His Majesty’s loyal subjects are fully apprised of this outrage. Perhaps a return to the methods of the Vigilance Committees is in order.

“This newspaper urges all right-thinking citizens to be in attendance tomorrow at the public hearing to be held before the Commissioner of Lunacy, Wingate Jones. The blot on the record of San Francisco must be removed.”

He was immediately released, with perhaps the most beautiful judgment I’ve ever seen  (okay, there is some mild law geekery here)

‘that he had shed no blood; robbed no one; and despoiled no country; which is more than can be said of his fellows in that line.”

In the 1870 census, Joshua Norton is logged as a resident of San Francisco, and the handwritten entry shows his occupation as “Emperor”

Ten thousand people attended his funeral, and there’s a lovely plaque in his honour on the Golden Gate bridge.

(For more on Emperor Norton, I recommend heartily Neil Gaiman’s short story “Three Septembers and a January”   in Fables and Reflections.  He tells it, obviously, far better than I have, and if you don’t have a tear in your eye at the end, then you’re made of stern stuff.  Also, Mark Twain wrote about him in newspaper columns, so in merely attempting to retell his story, I’ve gone up against two proper titans of literature)

Unlike Norton,  Cixi, really was an Empress, an Empress of China, who ruled for about 50 years, dying in 1908.  She died the day after her bitter enemy, who would have become the Emperor died of terrible stomach pains (which we now know to have been massive arsenic poisoning. She remains a hot suspect for that).  She was the last Empress of China, and was suceeded by the Last Emperor.

(I suspect Dowager Cixi is not a feminist icon, as a result of that not-too-sisterly final sentence. As last words go, it is not quite up there with Oscar Wilde’s  “My wallpaper and I are fighting a duel to the death, one or other of us has got to go”   but it was clearly heartfelt, and not self-aggrandising)

One of the more interesting decisions that Dowager Cixi made, and the reason I’ve heard of her at all, was that when weighing up how to spend the naval budget, given that China was at the time in a running conflict with Japan and had lost almost its entire navy in the 1894 first Sino-Japanese war, instead of opting for spending the money on boats or sailors, decided to spend it all on refurbishing a summer palace.

“Here’s the naval budget. Our navy has been largely wiped out by a superior force. We need a new navy. The money has all been spent on a summer house.  Well, that will really help when Japan’s navy comes back for round two.  I think that may, perhaps, have been a bad decision…”

“Ah, you are, your worshipfulness majesty. I love the summer palace. A masterstroke, if I may humbly suggest so”

To be fair, she did make the palace LOOK like a boat.   (and the Chinese navy put a sign on the Marble Palace saying that it was a Chinese naval training academy)

You will note that, this, the only vaguely naval thing that the Empress spent the entire naval budget on, is a boat made out of marble. Marble has many fine qualities – seaworthiness, is not amongst them.

This was an unpopular move at the time, and became even more so a few years later, when Japan’s navy kicked the living heck out of China’s beleaguered navy.

To be fair, many historians now believe that if Dowager Cixi had spent the money on battleships, they would have all just been sunk by the Japanese Navy anyway, countless more lives would have been lost, and there wouldn’t now be the fantastic marble palace boat to look at, so maybe she was not the worst military planner in history, but simply ahead of the curve.

The cost of running her Court was $6.5 million per year  (which is reported as being an ‘astronomical amount at the time’ )  and each of her birthdays was celebrated with the release of 10,000 caged birds. She is reputed to have once eaten a 150 course meal at a banquet.

This made me feel rather sorry for her – after her death, her tomb was raided  (probably that Lara Croft) and the pearl that had been placed in her mouth to prevent evil spirits from getting in was stolen.

But gosh, the Empress wasn’t the last person to try to build ships out of manifestly unsuitable material.

The US navy decided during World War I, to build 12 battleships out of concrete. Yes, concrete, that notably buoyant substance.  How did that experiment go?

The SS Atlantus is pictured below.  Apparently, the experimental material “proved impractical due to weight”    [astonishingly, this happened after ‘several transatlantic voyages’]

Undaunted by this, the US Navy had another crack at it in WWII.  Rather than build 12, they went for 24.  Well, why not, as they worked so well first time.

[Sad geeky fact – you can build a boat out of concrete, provided it is the right shape – it just has to displace more weight of water than the weight of the ship. Steel isn’t exactly light, but steel battleships can float] 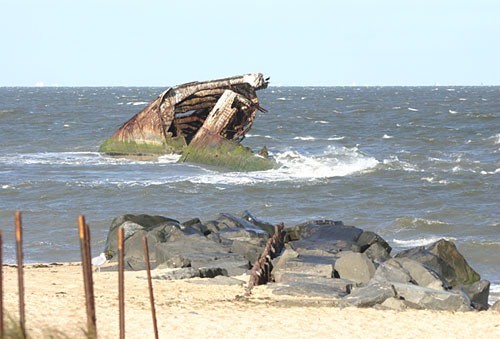 Comments Off on An Emperor and an Empress