RSS Feed
← The case I am most pleased about this year
There’s a small boat made of china, going nowhere on my mantelpiece →

This post is by way of being a book review, unsolicited, for a non-fiction book called “Injustice”  by Clive Stafford Smith.

I’ve popped you an amazon link here, not because I get any money for doing so, but because I thought it might be helpful

The book is written by a British lawyer who now practices criminal defence law in America, specifically death row appeals.

It deals with one particular individual, who was convicted for the murder of two people, a man and his son, in cold blood in a hotel room. He knew the victim and had quarrelled with him, there was an eye witness who described everything, his prints were in the hotel room, and the ballistics expert testified that the bullets fired were compatible with the gun that the suspect had been found to possess by police officers who had stopped him months earlier. The defence called no witnesses, and even the suspect himself did not go into the witness box. He was duly convicted of the murders.

Chapter one sets all of that out, and you may, as I did, read all that and say “Well, none of this sounds like an injustice, he sounds bang to rights”

Mr Stafford Smith then picks up the case and the story at the point at which the defendant, found guilty and awaiting the death penalty, contacts him to launch an appeal, and the investigation he conducts.

More interesting though than the focus on the detail of the particular case (which is compelling in itself) is the analysis of each of the stages and participants in the process, and how Mr Stafford Smith shows that the system itself is inherently flawed.

For example, there’s the fact that the jury were told that the prosecution eye witness had passed a lie detector test showing that his testimony was true.  That’s not quite accurate, when full disclosure is obtained after the conviction, because it shows that :-

(c)   The prosecution (including the trial lawyers) knew this

(d)   The eye witness, with the help of the prosecution, then made further depositions, correcting the bits that he had obviously lied about, and to make his version of events fit better

It gets a lot worse than that, but that was the first bit where I dropped the book in horror and had to pick it back up and read it back to Ms SuesspiciousMinds.

The author looks at every part of the process – from the police officers who call Crime Hotlines to give ‘anonymous tips’ about people they are about to arrest so they can claim the reward, to the original defence attorney who had been given a flat fee and thus didn’t put sufficient hours into the case (and that if they actually do that on public defender rates the hourly rate they get works out to be about $2.50 per hour), to the jury, to the Judge (in this case, the trial Judge was arrested halfway through the trial for having taken bribes from other defendants in cases – this man’s defence lawyer knew that the defendant had been approached by another attorney who had suggested that if the defendant used them and paid them a large sum of money they would get a successful outcome from the Judge in question, but didn’t think that was worth raising), to the appeal process that essentially decides that you can win an appeal on a technicality but not on evidence that ought to have been put forward by your defence attorney  – i.e if you have a bad lawyer at trial, you get screwed both at trial and later at appeal if he just didn’t do his job.

He even shows why an innocent defendant can be the worst sort of client to have – this man knew he was innocent, so why spend money on your lawyer calling lots of witnesses to prove it, why give evidence and tell your side of the story, when of course you can’t be found guilty of murder if you didn’t do it?

It is an excellent book and the structure of it makes me think that with the right case, one of the journalists who claim in hand-wringing style to be deeply worried about family justice (whilst their newspapers run pro Fast Adoption campaigns) could write.

It also seems to me that Al Alas Wray would be a good case to look at   – not that I am suggesting for a second that any of the professionals in that case were bent, or incompetent, or dumb in the way that some of them appear in “Injustice”  but rather looking at how the system can make well-intentioned, capable, reasonable and competent people get something badly wrong, and how Al Alas Wray might sadly represent the high waterline of British justice being able to get to the bottom of such a potential miscarriage of justice and fix it, whereas the changes coming our way seem to me to reduce the prospects of that in the future.

The bit that I found interesting was the chapter about prosecutors, and the suggestion that it is certain types of people, certain types of lawyer who choose to prosecute criminals.  They perhaps believe strongly in law and order, that the police are generally right, that justice prevails, that the system works, that the people who are convicted at trial were rightly convicted.

That did make me think, because of course, my job is sort of analogous to that – I do present cases to Court involving parents where part of my job is to present evidence as to the flaws of their parenting, and sometimes that involves persuading the Court that it is right that their children should no longer live with them.

I like to think, and maybe this is my own Prosecutor Bias, that my take on my job is to present the evidence fairly, to play with a straight bat, and that where such an awful decision is taken, it is because it is the right thing to do.  And ultimately, every decision that a child can’t be with his or her parents is a failure, of a kind. It is sometimes the least worst of all the options available on the picture at the time, but it is always a bad thing. I think that’s true of the colleagues I work with too.

Perhaps I am deceiving myself. I’m sure also that there are people who don’t approach the job that way. I know that because it wasn’t the way I approached the job when I started.

I was young, and idealistic, and believed that my job was child rescue and to protect children from wicked people who would mistreat them. When you come into the world of child protection, initially you do think that people who could abuse children must be wicked and dreadful – it is one of society’s great taboos, after all, the notion of parents harming their children.

As time goes on, and particularly with the benefit of having crossed the floor and represented parents against the State, you realise that most of those parents that initially seemed wicked are just scared, baffled, lonely, needy or damaged.

I used to think that my job was a bit like being on the battlements of a castle under siege, and that it was my job to keep the inside of the castle (the child) safe from the besiegers.

I now think that my job is much more like being outside the castle with the parents, and that it is my job to find an appropriate ladder that would be the right one to help them climb the walls and get over into good enough and safe parenting, so that they can be together with their children and the child will be safe and happy.  Sometimes it is also my job to help them up the first few rungs. Sometimes it is my job to realise that the ladder we thought would be right isn’t a good fit and to find another one.

Sometimes, sadly, it is my job to tell the Court that despite all of that, the parent got stuck halfway up the ladder and couldn’t get over the good enough or safe parenting wall. Sometimes that they got halfway up and climbed back down a few rungs. Sometimes that they looked at the ladder and decided they couldn’t do it at all, paralysed by vertigo, or influenced by people wanting them to stay on the ground with them.   Sometimes we argue about whether someone is halfway up, three quarters of the way up, or all the way up, or whether they should have another go with a different ladder. Sometimes we argue about whether the type of ladder they need can be found in time, or whether it costs far too much.

But it certainly isn’t my job to pour boiling oil on them as they try to climb up. I know some of the readers of the blog won’t believe that, and they are entitled to their belief.   They may well have had personal experience of Local Authority lawyers and social workers yanking the ladder away from under them, greasing the rungs, or pouring that boiling oil down.  That is something I feel bad about – I don’t deny that it happens, but I feel fervently that it shouldn’t.

I don’t think it harms any of us to reflect from time to time whether we have that balance right, are we defending the castle come what may, or are we trying to see if someone, given the right ladder can get over the wall and deserves to be inside the castle?

Anyway, here’s a picture from CloppaCastle, which the older readers may recall.  It had a very nice theme song, containing the words “Friendly enemy”  and maybe that is close to the role that my job comes down to. 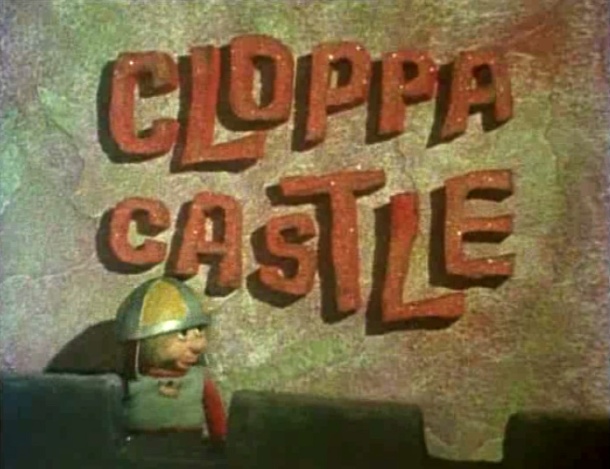 Law geek, local authority care hack, fascinated by words and quirky information; deeply committed to cheesecake and beer.
View all posts by suesspiciousminds »
← The case I am most pleased about this year
There’s a small boat made of china, going nowhere on my mantelpiece →