RSS Feed
← Capacity to consent to sex – do you want a Hanc or a Hunc?
section 20 drift →

Are YOU the Lord Chancellor? Find out in our quiz

This post guest-written by Misty St Clair, Agony Aunt of Jackie magazine in 1984 and was written by her at that time, following an excess of Advocaat and a bout of unexpected fortune-telling and a descent into legal matters – her column was not eventually run that week, the editor considering it to be “somewhat niche, dahling”.

(Suesspicious Mind note :- This was going to be by Geneva Minty, Agony Aunt of Just Seventeen magazine, but I didn’t dare face looking on Google Image for “Just Seventeen” )

A lot of young adults write to me with their problems –  “When I marry George Michael, will his chum Andrew want to be hanging around all the time?”   or  “My friend says you can’t get pregnant if you eat four After Eights straight afterwards”  or “How can I apply lipstick like Robert Smith”, but one question comes up more than any other.

It is this  “Misty St Clair, am I the Lord Chancellor?”

And it is time that this issue, which troubles so many adolescents, was answered. Find out, in this simple quiz.

1.  Which of these are real Judges?

2.  Your Government intends to slash and burn the legal aid budget , what do you do?

A  Lobby in Cabinet for the benefits of legal aid, and educate your colleagues on the Rule of Law

B Help push through the reforms, but commit to provisions that ensure that nobody will have their human rights breached

C Pretend to do B above, but secretly issue guidance that means that those provisions will hardly ever get used, then lose in the Court case about it

3. An idea emerges that to please the Daily Mail, the Government should ensure that foreign nationals don’t get legal aid, do you?

A.  Resist on the basis of unfairness and discrimination

B  Reluctantly advise that it isn’t possible

4. In order to cut costs, you are asked to ensure that victims of domestic violence have to produce documentary evidence that puts them at risk of harm, do you?

A. Resist on the basis that the law exists to protect the vulnerable

B  Introduce a need for documentary evidence but make it reasonable

C Introduce a need for documentary evidence, make it near impossible to satisfy, and lose in the Court case about it

5.  You are asked to come up with a policy that will show how tough the Government is on prisoners, do you?

C Ban them from receiving books, claim that this was never intended, lose in the Court case about it – but even then, don’t reverse the policy until after Christmas, ensuring that the unlawful and unpleasant ban on books still stops prisoners getting books as Christmas presents

6.  Imagine that you are the manager of a football team  (ask your dad or big brother) called “Judicial Review United” and you lose six matches in a row, do you?

A  Resolve to train harder, play better and win the next game fair and square

B Grumble about refereeing decisions but keep playing the same way

How did you do?

Mostly A’s   +    You have nothing to worry about – it may seem sometimes that you have some Lord Chancellor tendencies, but really it is nothing to be ashamed of. Many young people go through this phase and are idealistic and naive and think about experimenting with becoming a vital check and balance on the excesses of the State, and they just come through it. More people than you know. You are not alone!

To be honest, many of your ideas about what Lord Chancellors are like are very old-fashioned – the world has changed a lot, you know!

Mostly B’s  –  there is a risk that you might be persuaded by more ‘grown-up’ friends to dabble in Lord Chancellor-ness, but you are far too sensible to really get caught up in it. Just remember, as Misty St Clair always says  “The Coolest Thing you can ever do is Say No Thanks” .  Just like Zammo in Grange Hill, you can come out the other side and live a happy and rich life.

Mostly C’s  – There is no easy way to break this to you, there is a good chance that you are reading your sister’s magazine in the hope of finding some problems that help you understand girls. You are destined to become the Lord Chancellor. You may be thinking that you can avoid this fate by never studying law, working in law, having any interest in law or any knowledge of law. It will not stop what is foretold.  For reasons that are inexplicable, you and you alone, will still become Lord Chancellor even though you have no working concepts of anything you would need to know to do the job well. You will also become balding, I’m afraid. That will teach you to read Jackie – stick to Shoot or Victor and you would be much happier.

Till next time, I’m Misty St Clair and remember, “a problem shared is a problem that lots of young boys will read secretly and giggle over” 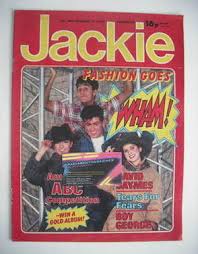 Nothing says fun like a boy band holding scaffolding. That and LAW!

Posted in stuff that isn't law at all and tagged nonsense. Bookmark the permalink.

Law geek, local authority care hack, fascinated by words and quirky information; deeply committed to cheesecake and beer.
View all posts by suesspiciousminds »
← Capacity to consent to sex – do you want a Hanc or a Hunc?
section 20 drift →