Update about the book

So this is what is happening at the moment with the book.  I finished my own edit at the end of October, and I reached the point where I’m happy with the book. Or at least, the point where I don’t think I myself can see anything else that needs fixing. You can just be too close to it to be able to be as clinical as you need to be to push through and strive for improvement.

That edit went off to Unbound and they have the manuscript with an editor who is going to go through it in both a small scale (sentence by sentence, word by word) way and a big picture way (would it be better if this character did this, or that this incident that happens here was instead this different scene)

That’s quite a daunting prospect – because now I’m waiting for the annotated edited manuscript to come back, and it will be someone really getting under the bonnet of the book and really scrutinising it to see where it works, where it doesn’t work and how to make it better. 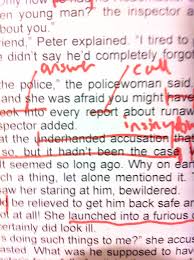 The only thing I can really compare it to is that bit in Trinny and Susannah where they get some poor woman down to her undies and discuss her body and what are her best bits and how she should dress better (hopefully without the groping element that always seemed to happen).   It’s more than a little terrifying, but the idea is that someone from the outside without an emotional attachment to the book will be in the best place to make constructive suggestions to make it be the best it can be.

That process is going to take a couple of months, then it comes back to me and I go through the suggestions – some will be really easy, I think – the sentence level stuff, and some might be hard – this character isn’t believeable, or this bit of the plot doesn’t work at all might be very hard. I then work through the book again, deciding how to make those fixes and do the rewrites to get it to work better.  (I get final say, obviously, but I’m going to try very hard to be open-minded and not defensive about my little darlings)

When we have a finished version of the book it then goes off to a proof-reading editor, who will be fixing typos and grammatical issues, and I know in advance that they are going to be cursing me for sprinkling my prose with commas and taking loads of them out.

When that’s done, it is galley-proofs and choosing a cover and doing the blurb about the book – the really fun stuff.

All in all, that’s probably going to be about 3 months, though it is hard to call exactly how long it will take, because it depends how much of the next stage is about fixes that are like replacing a lightbulb and painting the radiator and how much is about installing a new kitchen or replacing the roof.

People can still pledge and get copies, so if you haven’t got round to it yet, get stuck in.

Thank you to everyone for their support, it means a huge amount to me and I honestly can’t express how much I appreciate it.

Posted in Uncategorized. Bookmark the permalink.