Thank you Holman J for the best case name ever. Re DAD.  [Although annoyingly, the case is really about an uncle rather than a dad…]

If you are doing a committal case, either for or against, this case will be worth reading and taking with you. Paragraph 10 of the judgment, as underlined, makes a very difficult argument to overcome, due to the standard orders being flawed.

In this case, the father had allegedly abducted his son in breach of a Court order, and the child having been kept away from the mother for over 8 months.  The mother obtained a Collection Order, which compelled the father to return the child, but it had not been possible to locate the father to serve it upon him.

However, the father’s brother was at a known address and an order was made in these terms:-

“(2) If [the father, who is specifically named in the order] and/or any other person served with this order is in a position to do so, he or she must each deliver the child into the charge of the Tipstaff.

(3) If the respondent or any other person served with this order is not in a position to deliver the child into the charge of the Tipstaff, he or she must each:-

(a) inform the Tipstaff of the whereabouts of the child, if such are known to him or her; and

(b) also in any event inform the Tipstaff of all matters within his or her knowledge or understanding which might reasonably assist him in locating the child.”

It is important to mention that paragraph 7 of the order later provides that:

Fairly traditional order, and I have written about a number of these cases where a relative knows where the child is and conceals it and then is committed to prison.

5…on Saturday 27th June 2015, police officers acting on the instructions and authority of the Tipstaff attended at an address at which Muhammad Nawaz Chaudhry was residing. I mention that, as I understand it, it is not in fact his own home, but he was residing there with a relative of his. Muhammad Nawaz Chaudhry is the brother of the father of the child and, accordingly, the uncle of the child. The police officers introduced themselves to Mr Chaudhry and produced a copy of the Collection Order in Form 2A and asked him for any information he could give as to the whereabouts of the child. In summary, and in effect, he said that he did not know where either the child or his brother, the child’s father, were. The police officers then telephoned the Tipstaff himself. The Tipstaff himself considered that Mr Chaudhry in fact knew more than he was revealing and, accordingly, that he (the Tipstaff) had reasonable cause to believe that Mr Chaudhry was disobeying paragraph 3 of the Collection Order in Form 2A. He therefore instructed the police officers to arrest Mr Chaudhry in obedience by the Tipstaff himself to the provisions which I have mentioned of the Collection Order in Form 2B, which are directed to the Tipstaff. Mr Chaudhry was then conveyed to the local police station in custody and brought before a judge here at the Royal Courts of Justice on the following Monday. He was further remanded in custody by that judge and only finally released from physical custody on Friday 10th July 2015. In other words, following the evening of his first arrest on Saturday 27th June 2015 until his first release from actual custody, Mr Chaudhry spent thirteen nights in custody; eleven of them in Pentonville Prison. On Friday 10th July 2015 he was released on bail subject to certain conditions. There have been subsequent adjournments of the application to commit him to prison and it has come before me (dealing with the matter for the first time) for substantive resolution today.

In this case, counsel for uncle, very generously and fairly told the Judge that the best points of the uncle’s argument had been arrived at through hard work of the uncle’s solicitor.

I should mention that appropriately, but generously, Mr Main-Thompson made very clear today that all or most of these points – which are made in his most excellent position statement and skeleton argument, dated 15th September 2015 – are points which have been generated by the input and researches of his instructing solicitor, Ms Maria Wright. She is a solicitor who is employed by Freemans, who act on behalf of Mr Chaudhry, and who herself has conduct of this matter. There are within that position statement and skeleton argument a number of important points with regard to the lawfulness of the Collection Order in the form in which it was made in this case. There is, in my view, however, one knockout point with which I will deal in a moment. Since I regard that point, even standing on its own, as completely decisive in this case, anything I were to say in relation to the other points would be what lawyers called obiter. It happens that there is very currently a thorough – going review of the form and language of collection orders. In my view, it is undesirable that I should express in judgment any view or comment which would be obiter about these other points

Always  nice when a Judge praises the hard work of a solicitor. Even nicer when he describes one of your points as a knockout one. 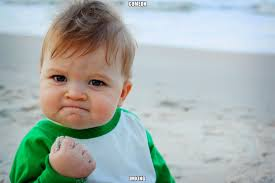 Hell to the yeah

The format of the Court orders, which Holman J has previously complained about, now mean that the vital component for a committal, that the front page of the order shows the person what they must do or must not do AND that the consequences for not doing it can be imprisonment.  At the moment, the first page is a lot of dry and dull rambling about who was present in Court that day and the dates of birth of everyone involved and yadda yadda yadda.

The Rules do provide a judicial discretion to proceed with the committal if there’s a flaw in the process but it is satisfied that no injustice would be caused to the defendant.

Here, the Judge considered that this did not apply.

14.  I do have a discretion under paragraph 13.2, but I can only exercise it “if satisfied that no injustice has been caused”. In support of her submission that no injustice has been caused, Ms. Chaudhry invited me to watch and listen to the video that the police officer made contemporaneously whilst visiting Mr Chaudhry and arresting him. As I understand it, this is a video made from some form of camera attached to the clothing of the police officer. I mention that, as that video forms part of the evidence or material upon which I base my decision in this case, I have ensured that it was available to be seen by the accredited journalist who is in the courtroom and the journalist has seen it. I would indeed have ensured that it was able to be seen by any member of the public who had shown any interest in this case and had been present at any stage during the hearing, although in fact there has been none. The whole duration of the visit by the police lasted about twenty minutes. I wish to stress that the two police officers appear to have handled this whole matter with the utmost courtesy and lightness of touch. From start to finish, there was nothing remotely heavy handed by either of them. Rather, they treated Mr Chaudhry with the utmost courtesy, respect and indeed patience, whilst ultimately arresting him with minimum formality. He went with them in the car, but at no stage was he placed in a handcuff nor handled physically in any way by the police. After being admitted to the house, the officers went into the front room immediately adjacent to the front door. They were holding two copies of the collection order and, therefore, a number of sheets of paper. They handed several sheets of paper, which I assume to be one copy of the six page collection order, to Mr Chaudhry, and the officer said “Have a big old read of that. There’s quite a lot there”. Mr Chaudhry sat down in an armchair and did for the next ten minutes or more hold the sheets of paper in his hand, but he hardly glanced at them at all. There is one moment in the video when he can be seen to be turning through the sheets of paper, but, even in that moment, he does not appear to have reached page 5, upon which such warning notice as this order contains is printed. At no stage, so far as I could discern, did either officer specifically draw the attention of Mr Chaudhry to that warning notice, nor indeed talk him through the language of the order at all. I do not say that necessarily critically of the officers; I merely record the fact that his attention was not specifically drawn to any particular part of the order and certainly not to such warning notice as appears on page 5. After the officers spoke on the telephone to the Tipstaff, they informed Mr Chaudhry that they must arrest him. They allowed him time to go upstairs and into the kitchen; and, as I have said, the whole process was gentle, orderly and sympathetic. As the two officers and Mr Chaudhry finally left the front door of the house, one officer said: “You can take the paper if you like so you can read it”. As Mr Chaudhry got into the back seat of the police car one can see that he did still have pieces of paper (which I assume are the order) in his hand, but there is no sign, at any rate at that stage, of his actually reading it. Before leaving the content of that video recording of the whole process, I mention that at one stage the officer said to Mr Chaudhry that “someone from the court will do a quick interview” with him. Frankly, I do not think that either Mr Chaudhry or either of the officers imagined for one moment, when they arrested him and took him away in the police car that night, that he was about to spend no less than thirteen nights continuously in custody. The picture and impression that was conveyed was that he would have to go to the police station under arrest and no doubt in custody perhaps for that night, but that he would then be visited and interviewed by “someone from the court” and probably released soon thereafter.

You may be reading this and think that it is potentially applicable to any order drawn up in the standard way, where the warning does not appear until page 5 of the order. And yes, it is certainly arguable.  Less so of course when the person is given substantial time to read the order before being in breach of it, and much less so if the person is present in court and represented when it was made and the Judge gives the warning about the consequences of breach. But yes, expect to see Re Dad being photocopied and handed out a LOT in committal cases until the standard orders get fixed.

And if you are drafting, until the orders get fixed, make sure you put the wording that’s normally on page 5 on the first page, in the biggest and boldest type that you can get away with.

Because at the moment, Re DAD is a

Don’t push your luck in asking for the £200 though