Tag Archives: taking phographs in court and putting them on social media

If you’ve ever been to Court, you probably saw at some point amongst all the pinstripes, cufflinks and bags under the eyes, signs telling you that you aren’t allowed to take photographs.

It is a criminal offence to take photographs in Court, you might even have had security staff take a camera away from you to be collected later.

The law about this is s.41 of the Criminal Justice Act 1925 (CJA 1925).   Of course, in 1925, it was probably an awful lot easier for a security guard to detect that you have come in with a camera in your possession

Are you illicitly taking a photograph? “No, just please stand very still for 20 minutes longer though”

Nowadays, most people have camera phones. And not necessarily ones as obvious as this

As designed by Jermaine from Flight of the Conchords

You can’t make clay models of people either, or sketch them. Yes, even those Court artist sketches aren’t allowed to actually happen within the Court room, the artist has to do them later from memory, which explains a lot. 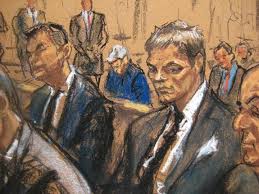 No, to be fair this witness MIGHT have been Kevin Bacon after twelve months in Guantanamo and then being possessed by a demon.

I wrote about the weird intricacies of the law on photographing in Court buildings years ago, here

That was an imaginary judgment. It is quite unusual to see a real judgment about someone being prosecuted for doing this, but that’s the subject of this blog. In particular, it deals with the situation where the taking of photographs wasn’t something which just happened, but where it was indicative of defiance and contempt for the Court process, particularly where the photographs were then placed on social media and comments added to them.

This case involved a nasty murder trial, where the accused (later convicted) was said to have filmed the murder and watched it on a mobile phone for enjoyment later. Two of his friends attended Court, and photographs were taken and placed on social media.

Hint, if you are later going to argue that you hadn’t seen the signs saying that mobile phones and photography weren’t allowed – DON’T ACTUALLY PHOTOGRAPH the signs themselves.

Again, you have to admire the later chutzpah of Cox claiming that the comment ‘Fuk the judge!” was not directed at the Judge in particular, but the judiciary in general. I’m sure the Court loved that.

The prosecution here were concerned that taking photographs in Court particularly of criminal trials, and particularly whereas here it seemed to be as a trophy and act of defiance, was increasing in prevalence, and the punishment required more than the level 3 fine of £1000 allowed by the 1925 Act. They sought to commit on the basis of contempt, which can obviously carry a custodial sentence.

For non-lawyers, the Latin here – actus reas and mens rea may seem a bit confusing. Any criminal act requires two ingredients – the guilty act (actus reus)  the thing you did, and the guilty mind (mens rea)  what was in your mind at the time.  The actus reas is always the easy bit to understand  “Did X stab Y, Did X take the DVD player from Y’s house, Did X take photographs inside a Court room?”.  The mens rea can be trickier – some offences can be Strict Liability  (just doing the act is enough, you don’t need the mens rea element – many driving offences, for example), some are “Intent”  – the prosecution need to prove that X intended to injure Y, or to dishonestly deprive him of the DVD player etc, and some are “Recklessness”  – that X did the act without proper care and attention as to what might be a likely or possible consequence of that.   [Sorry, I have just squashed about 3 weeks of Criminal Law into one paragraph, so it is necessarily a rough summary]

(a) Submission of the Solicitor General

What did the defence say? Well, unsurprisingly, they focussed on the mens rea element, as they were bang to rights on having actually taken the photographs.

b) Submission on behalf of Parker-Stokes

The defence here are arguing that for contempt (rather than the statutory £1000 fine under the CJA 1925) the mens rea had to be that there was a SPECIFIC INTENTION to impede or prejudice the course of justice. The prosecution would have to prove that.

What did the Court decide on actus reas?

(3) The actus reus of contempt

(a) The interference with the proper administration of justice

And on mens rea. Firstly, the Court gave a judgment as to whether on the facts of this case, even the highest form of mens rea “Specific intent” was made out, and were satisfied that it was

But then went on to decide that specific intent was not going to be necessary  (although someone who is able to evidence, for example that they genuinely could not read the signs prohibiting photograpy – perhaps they don’t speak English or cannot read, could be found to NOT have committed contempt)

(d) Conclusion on the intent required for this type of contempt

[Just the deliberate act of taking the photographs and posting them on Facebook was sufficient. ]

The men were convicted of contempt. They have not yet been sentenced, but I would expect a custodial sentence. Obviously the Court are going to be much sterner on a criminal trial, particularly on a murder trial, but it is a warning that photographs taken for the purpose of defying the Court and put up on social media run the risk of not just the £1000 fine, but a prison sentence.