RSS Feed
← In England, justice is open to all, like the Ritz Hotel
Letters of Destruction →

Would we want The Truth to be out there?

A bit of a thought experiment  / debate about ethics, and whether finding the truth is the be all and end all of Court cases.

In Douglas Adams series of “Hitchhiker’s Guide to the Galaxy” books  [which also contains the immortal line “the ships hung in the sky in much the same way that bricks don’t”]   there is a minor character named Prax.  Prax is about to give evidence in a trial which is interrupted by an attack, just as Prax is being administered a dose of truth serum. As a consequence, he is given too much, much too much, just before he is told to “tell the truth, the whole truth, and nothing but the truth”

This leads to him telling the Court everything about the universe  (on the same sort of basis of Neil Gaiman’s theory that we all know how to fly, and in dreams we just remember how to do it, but we always forget on waking) and sending everyone in the vicinity completely insane. A lot of it turns out to be about frogs.

So, here is my thought experiment.

If a new chemical is invented, which does this: –   “Absolute 100% guarantee, clinically tested, incontrovertible evidence, that it compels a person to answer questions truthfully, it lasts for one hour, it has no side-effects either during or afterwards, it causes no pain or discomfort and is completely safe”

Would it be okay to give that truth chemical to a parent in care proceedings who is suspected of having caused very serious physical injuries to a child, before you hear their evidence?

You can go on, if you like, to consider whether the truth chemical should be administered to social workers and Guardians – I’m happy to be an equal opportunity administer of Truth Drugs, I was just starting with the strongest case I could think of in a family Court setting.

[This obviously has similarities to the ‘you’ve captured a terrorist, and he knows where a bomb is, would you torture him?’ debate, but my answer to that is always unequivocally no, I wouldn’t; so I tried to capture something where the process itself was (a) guaranteed to produce a truthful answer and (b) harmless to the recipient]

Assume for this thought experiment that the Truth Drug is administered by a trained professional and that the Judge has rigorous control over the questions that are asked, to keep them pertinent and on point and not into other prurient areas.  And that section 98(2) utterly applies and that no evidence given in the care proceedings would be admissible for any criminal offence   [The only one it is admissible for is perjury, and that then becomes an impossible offence to commit]

On the plus side of administering the Truth Serum would be this:-

On the negative side :-

1. Free will    (this is a big one, and goes to the heart of it really).   It is akin to Anthony Burgess’ debate in “A Clockwork Orange” about Ludovico’s Technique – if you could MAKE people behave properly and remove the choice for them to behave in appalling ways, is that worse than having the free will to behave awfully and exercising it?

I.e is giving people the power to lie, even about the things that would absolutely be unequivocally better to know the truth about such as how a child came to have a broken leg, more important than always knowing the Pure truth?

2. The risk that someone might, potentially, feel guilty and feel that they had caused the injury, and thus confess to something they genuinely believed to be true, but that wasn’t objectively true.

3. The risk that an off-topic question gets blurted out and answered – for example, a father is in the midst of giving evidence and the mother shouts “Did you have sex with Miriam Margolyes?”  and the father answers, or  “Do you still love me?”

4. That in some way it reverses the burden of proof – it is suddenly up to the parents evidence to exonerate them, not up to the Local Authority to prove what happened.

5. It takes the need for lawyers out of finding of fact hearing cases  (you wouldn’t need lawyers to ask the questions, the Judge could just ask what she wanted to know).    Some might, I know, consider that not to be a negative but a positive.

I’m struggling to think of other negatives, and that’s not because I’m wanting to stack the deck in favour of Truth Serum.  I actually feel, in my heart, that I would be against Truth Serum, even though I absolutely believe in the advantages of getting to the real truth, rather than the fumbling in the dark that we have to do, even with all the best forensic scrutiny we can, asking questions aimed at deducing the truth is nowhere near as good as asking questions and KNOWING that the answers given are truthful.

I’d be very interested to know if others feel the same, or if the Truth Serum really had the certainties and safety features I’ve speculated about in the thought experiment, whether others would prefer to just have it administered and get to the absolute Pure truth and not our judicial approximation of it.

That has now led me to a quick exploration of our existing “truth serum drug”, which is sodium pentothal.

There’s clearly such a huge political/military/law enforcement interest in a Truth Serum which works in the sort of way I have described that it is not necessarily merely a thought experiment. If it is possible for a chemical to do this – and sodium pentothal gives a glimpse that it might conceivably be, there’s huge money involved in anyone who can make it.  Maybe in a hundred years time, the concept that you just asked people questions and they promised on a book they didn’t believe in that the answers would be true, will seem utterly ridiculous.

The developer of sodium pentothal Dr Robert House, was originally using it in sedation on women in the midst of childbirth, and when he noted that they became not only voluble but responded to any question in a frank manner, he started thinking of other applications.   [I do want to know what he was asking them, other than “does this really hurt?”]

His original thought was to use it in the exoneration of wrongly accused criminals.  It then became used in a therapeutic treatment of shell shocked soldiers, allowing them to talk about their feelings and fears without shame or worry, and to ventilate those locked-down emotions.  [It got badly tangled up in the Flora multiple personality case, where the girl undertaking therapy was just reflecting back everything the therapist was putting to her and embroidering it]

It can also be used to treat phobias, and still is.

The chemical has been much beloved by the CIA [allegedly] and spy novelists alike.

However, one of the problems with it as it currently works, is not that it gets people to talk, but that it has the sort of problem Douglas Adams touched on at the beginning – it gets people to talk about far too much, and makes them so suggestible and amenable to what is being put to them that sorting out fact from fiction is impossible.  You can get someone on Sodium Pentothal to be loquacious and cooperative, but what you don’t know is whether anything they are telling you is the truth, or whether they are just telling the questioner what they want to hear.

Sodium Pentothal is not so much the Truth Serum of the spy novels, but more of a “Talkative Agreeableness Serum”.  Which is not much use to us at all, either in our thought experiment or in using it to get certainties.  Nor is it a very snappy title. 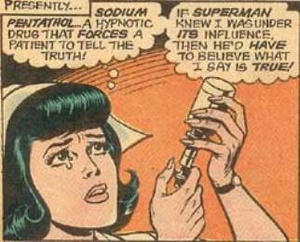 So, to be abundantly clear, I am not for a second advocating using Sodium Pentothal on witnesses – it would have exactly the opposite effect than we desire, they would just be putty in the hands of a skilful cross-examiner who could lead them down the garden path of their choosing.

And as I say, I’m actually even opposed to using my wonder Truth Serum that actually works and does no harm, because at the end of the day, Free Will is more important to me than Truth.  I don’t claim that this is the only answer or the right answer, it is just my answer.

Posted in fact finding, stuff that isn't law at all and tagged could you use truth serum in courts?, does truth serum work?, establishing the truth in court proceedings, free will, getting to the truth, serious allegations, sodium pentothal, truth serum, what if you lie in court?. Bookmark the permalink.

Law geek, local authority care hack, fascinated by words and quirky information; deeply committed to cheesecake and beer.
View all posts by suesspiciousminds »
← In England, justice is open to all, like the Ritz Hotel
Letters of Destruction →